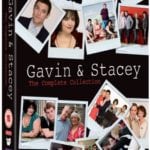 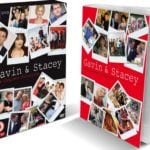 Gavin is an ordinary boy from Billericay, and Stacey an ordinary girl from Barry. After speaking on the phone to each other every day at work - they finally meet and fall in love... I won't lie to you, life is never quite that simple. For a start there are Gavin’s parents, Stacey’s mum and Uncle Bryn and best mates Nessa and Smithy to consider, as well as the small matter of living in different countries separated by a long bridge and a toll gate.

Winner of two Baftas and four British Comedy awards, Gavin & Stacey is poignant, genuine and hilarious – one of the stand-out comedy series of the 21st Century.

Series One: Falling in love causes a ripple effect on Gavin and Stacey's family and friends. And as their wedding day approaches we soon come to realise that there's nothing 'ordinary' about the Shipmans and the Wests after all...

Series Two: the honeymoon's over for the newlyweds, and their married life begins in earnest at the Shipman family home in Essex. But, as the reality of living so far away sinks in, Stacey starts missing her home in Barry Island along with her mum and her Uncle Bryn.

Series Three: Gavin and Stacey have moved to Wales. Stacey couldn't be happier now she’s back with her mum Gwen, her uncle Bryn and a daily diet of omelettes. Gavin on the other hand is adjusting to life in Barry, and although he won't admit it, he's missing his parents Pam and Mick and of course, his best friend Smithy. Smithy is bereft in Essex without Gav, and is trying to get used to the fact that his son, Neil the baby, is now living in a caravan with mum Nessa and soon-to-be stepfather Dave Coaches.

Christmas Special: It's Christmas time and the Welsh contingent have been invited to celebrate the festive season with the Shipmans. So with the help of Dave and his coach; the West's head East. Dawn and Pete have come round for Christmas Eve drinks, and Pete's brought his aged mum. Mick has an enormous turkey soaking in a bucket, Bryn has his mistletoe on standby and Pam has a cracker of a present under the tree for Mick.