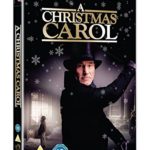 Miserly money lender Ebeneezer Scrooge (Patrick Stewart) does not believe in the spirit of Christmas; he is bad-tempered and unpleasant to everyone he meets, including his loyal but badly underpaid clerk, Bob Cratchit (Richard E. Grant). Then one Christmas Eve Scrooge is visited by the ghost of his former partner, Jacob Marley, who warns him that three ghosts will arrive that very night and attempt to show him the error of his ways. Scrooge is shown visions of Christmases past, present and future which force him to reconsider his selfish lifestyle, but is it too late for him to change his nature?Based on: The novel by Charles Dickens Technical Specs: Languages(s): EnglishInteractive Menu
Standing out in the crowded field of screen adaptations of the classic Dickens novel A Christmas Carol is hard to do, but this version pulls it off. When a transparent Jacob Marley walks through Ebenezer Scrooge's apartment door, you know you're seeing something both timeless and contemporary. Other strategically placed special effects--a funnel cloud that transports Scrooge and the ghost of Christmas present, the hollow spectre of Christmas future--keep you riveted without slipping into anachronism. But, as good as the technology is, the performances are what really power this 93-minute television interpretation. Patrick Stewart brings a depth to Scrooge that allows the character to go beyond the cartoonish qualities that have made him a Christmas mainstay. That doesn't mean he's any less heartless with his hapless employee Bob Cratchit (Richard E. Grant) or any less dismissive of his well-meaning nephew. A frail-looking Joel Grey makes an excellent ghost of Christmas past, and a superb cast ably fill the remaining roles. Director David Jones, shooting on location in England and at Ealing Studios, has achieved a balance of science and sentiment that will help this version hold up for many years to come. --Kimberly Heinrichs

Be the first to review “A Christmas Carol [DVD]” Cancel reply